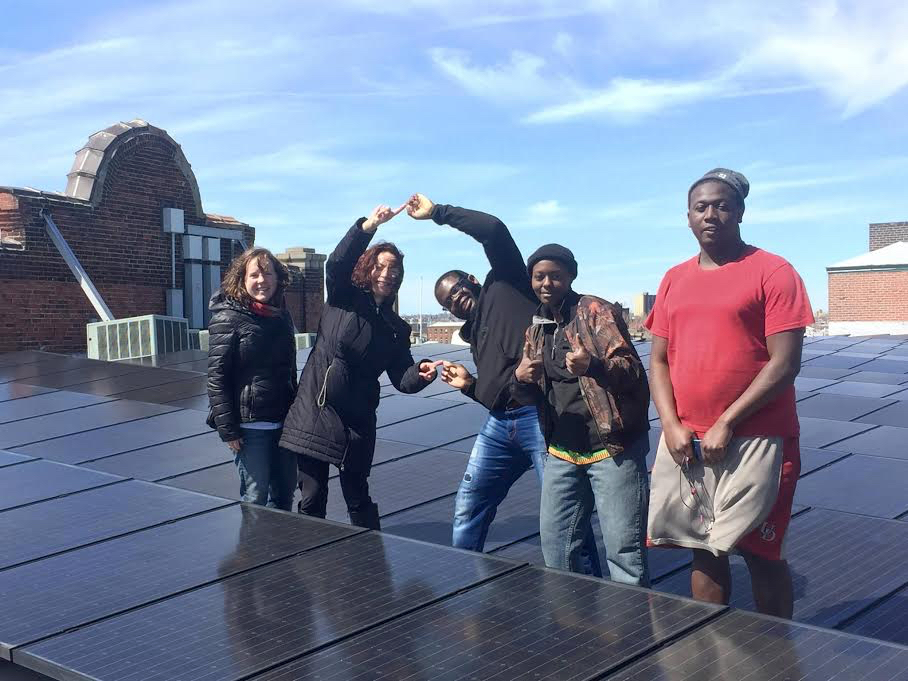 In 2014, the men’s support group at the Serenity House, a communal living and healing space on Lehigh Avenue near 12th Street, was transfixed as they watched cocoons transform into butterflies.

They held a release ceremony in the house’s garden once they were fully grown. It allowed the men — many of whom deal with addiction, poverty and mental health issues — to reflect on their growth, said O, the house’s hospitality coordinator who does not use her legal name because O “came through prayer.”

And the fragility and better understanding of the insects sparked environmental concern, which left them all asking, “Why don’t we act ourselves?” So they did.

Serenity Soular — a collaboration between Serenity House and Swarthmore College — started crowdfunding for solar panel installations in North Philadelphia that year and has raised more than $50,000 since, in an effort to shrink the neighborhood’s ecological footprint. The installations are completed in partnership with local solar company Solar States.

Serenity House was the site of the first installation in 2014, and the group is preparing to start crowdfunding to put panels on the nearby Village of Arts and Humanities. The installation at Morris Chapel Church on Lehigh Avenue near 12th Street  — for which Serenity Soular raised almost $30,000 — is scheduled for later in the year. It will be the first Black church in North Philadelphia with solar panels, O said.

Serenity Soular has a three-pronged mission: supporting renewable energy in North Philadelphia with installations and education, introducing community residents to jobs in the green economy and putting the “soul back in solar,” as its slogan states.

“It’s really about maintaining the integrity of the soul as we are also reclaiming our birthright to economic stability and education,” O said.

"It's really about maintaining the integrity of the soul as we are also reclaiming our birthright to economic stability and education."

To give North Philadelphia residents experience in green jobs, Serenity Soular runs an apprenticeship program with Solar States. Apprentices are trained in solar power installation, work hands on in the field and ideally graduate to a full-time employee, said Micah Gold-Markel, the founder of Solar States.

So far, three North Philadelphia residents have been trained and two have apprenticed with the company and become full-time employees — one being Germantown resident Ky Sanders.

Sanders became a Serenity Soular apprentice in 2014, but her fascination with electrical work originated in a high school auto mechanics class.

Hoping to inspire kids in a similar way, Sanders helped teach high school students about solar power during sessions at Benjamin Franklin High School in Spring Garden and A. Philip Randolph Career and Technical High School in Nicetown this summer. The School District of Philadelphia, the Philadelphia Energy Authority and Solar States also assisted with the classes. Showing North Philadelphia residents they’re capable of green jobs — an opportunity they may not have heard of before — can alleviate trauma and inspire growth in the neighborhood, Sanders said.

While homeless and studying electrical work at All-State Career School in Essington, Pennsylvania a couple years ago, Sanders said the classes, which she passed, motivated her to keep pushing.

“There’s a lot of things that don’t make North Philadelphia sustainable, but the people in there are,” Sanders said. “And if you give them the opportunity to make their surroundings more than what it is now, they’ll take it and run [with] it. … That opportunity has to brought there.”

Educating people about renewable energy and providing a segway to green jobs has been at the center of Solar States’s business model since it was founded 10 years ago, Gold-Markel said.

Outside of the Serenity Soular apprenticeship program, Solar States also leads ongoing classes at Benjamin Franklin High School and will hold a free six-week class for adults at the Philadelphia Opportunities Industrialization Center on Broad Street near Thompson in late March. The class’s top performers will be hired, Gold-Markel said. He added that, while the company has collaborated with Serenity Soular for two years, he hopes the organization trains enough North Philadelphia residents so his company isn’t needed.

“We need a more inclusive and easier access to green jobs, and the way that we can do that is training people … who come from neighborhoods and backgrounds that typically have been ignored by the construction industry,” Gold-Markel said.

Inclusion and collaboration are at the root of Serenity Soular’s mission — and O’s personal life and service, she said.

In 2010, she was homeless and freshly unemployed when she arrived in North Philadelphia. Pastor Donna Jones at the now-closed Cookman United Methodist Church told O there was a place for her in the vacant building next door — if she could transform it into a space where North Philadelphia residents could gather and find support.

That building is now the Serenity House, where O fosters a supportive community environment with women’s and men’s support groups, Bible studies, book and film discussions and exercise and stress management sessions.

Outside of Serenity House’s walls, O said Serenity Soular strives to reverse harm done to God’s Earth using resources that He created himself, like wind and sun — something all can benefit from.

“Serenity Soular and renewable energy allows us to … actually care about each other and God’s Earth,” O said. “Everything we have done has been rooted in relationship building, not competing, but actually working together to the best of our abilities.”