(Illustration by Jozefm84 at Pixabay)

Most of us have heard about the digital divide in terms of age.

The never-for-second-disconnected young person and the technology-befuddled and averse elder have zoomed right past stereotype and are edging into the realm of archetype. (Think I’m exaggerating? Check out the Starz series “American Gods” which turns the internet and social media into young, new gods at war with the elderly, feckless and tech-less gods.)

But the digital divide — that gulf between those who have ready access to computers and the internet, and those who do not — has never been simply about age. In fact, recent research by Pew shows that in some demographic subcategories (people with disabilities, for example), both young and old have been slow to adopt tech. 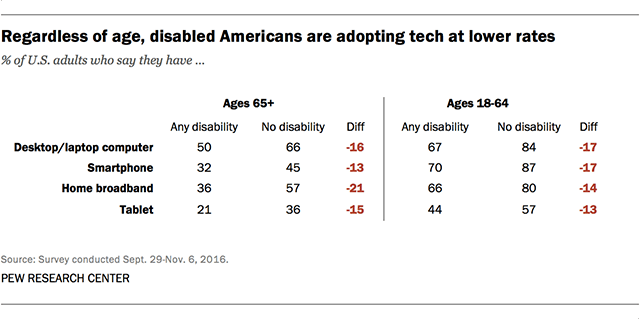 Likewise, income has long been recognized as a bar to equitable and regular digital access. Libraries early realized that by providing computer and internet access they were providing a service needed by many of their patrons (42% of Black library patrons, and 24% of Latinx and white patrons use library computers and internet). Some internet providers developed programs, like Comcast’s Internet Essentials, to enable access for low-income families with school-age children, and the federal government offers Lifeline if the household’s income is at 135% or less than of the federal poverty guidelines. 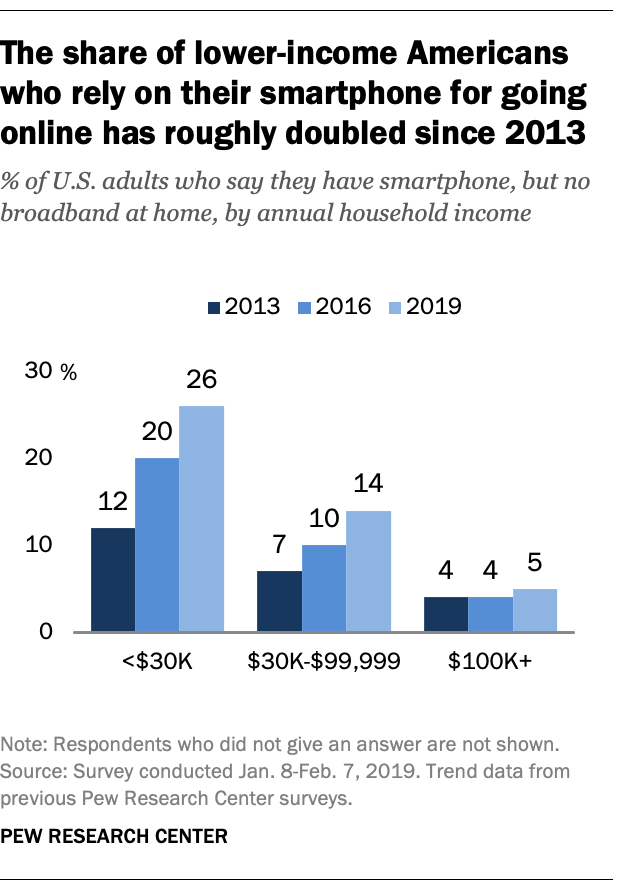 The recent Pew report shows that though low-income folks have made some gains in tech adoption, there is still a significant divide. Many low-income people turn to smartphones as their sole means of getting online because they do not have broadband service at home. “A majority of U.S. adults cited monthly cost of home broadband subscriptions as a reason for not subscribing,” the report states. “Others cite credit scores that are often required by broadband companies as a factor.” 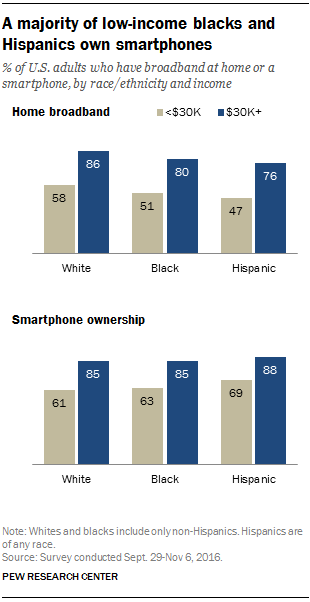 The racialized component of the digital divide is also evident from Pew’s research: 22% of Latinxs and 15% of Blacks access the internet solely via a smartphone, compared to the 9% of whites who do so.

And while smartphones have been, in many ways, great equalizers for this very reason, there are significant differences in the digital experience when it is your sole form of online access. Imagine filling out the FAFSA application for a college loan on your phone, or an application for health insurance, or anything but the simplest income tax return.

Some organizations have sought to address this aspect of the digital divide by redesigning enrollment forms with mobile-only user experience in mind (Philadelphia’s Benefits Data Trust, for example), but the prospect of having to do everything requiring online access via phone is pretty daunting.

The digital divide also persists in significant ways for returning citizens (whose online access may be curtailed by parole or transitional housing prohibitions), for those experiencing homelessness, for indigenous peoples, migrant workers, immigrants in unconventional housing, rural and sometimes even suburban residents.

During this month we intend to look at as many of these aspects of the digital divide as possible, and to take a look at those who are trying to address  and bridge the gap.

We will also take a close look at Census 2020 during this month. For the first time, the census will be conducted digitally. Given the actuality of the digital divide, this means many people of color and many of the folks from the marginalized communities already mentioned are at risk of being undercounted. This will have significant impacts not only on those communities themselves, but also on the nonprofits, mission-driven and grassroots organizations that serve them.

There are solutions being formulated that propose to prevent, address and mitigate the effects of such an undercount, and we are actively looking to highlight local efforts to do just that during this digital divide month. Help us by suggesting Philadelphia-area organizations and individuals actively working on this by clicking the button below.

Send a suggestion for our Census 2020 stories

Census 2020 will also be explored during this year’s Tech in the Commons — our reporting and event series on digital engagement strategies for place-based nonprofits. Stay tuned for more details about that as they become available.