COVID-19 has boosted food-related philanthropy, but for how long? - Generocity Philly
Subscribe for daily news When a disaster strikes, philanthropic first responders primarily focus their giving on trusted nonprofit organizations that provide basic needs services to maintain a safety net for the most vulnerable. And nothing is more basic than food.

Take the Connelly Foundation, which quickly pivoted away from its ordinary grantmaking practices and donated $3 million in COVID relief to local nonprofits. “These COVID grants did not require anyone to apply or jump through any bureaucratic hoops — the idea was to get cash to them as quickly as possible to help during the time of maximum need,” Tom Riley, president and grandson of the foundation’s founders told CatholicPhilly.com.

“I can’t say the donors primarily turn their philanthropy to basic need organizations during a disaster, but these organizations do receive a higher media presence at such times,” explained  Sara Hertz, senior vice president and chief development officer of Philabundance. “More people may support us out of a need to take action and donating to a basic needs organization is a simple, yet impactful way of meeting this need.”

Melody Keim, executive director of the Greater Philadelphia Coalition Against Hunger too frowned at the characterization that disasters increase donor giving for food-related organizations. “It’s not what I would say. I would say it is great that people are seeing and recognizing food insecurity in our region. (COVID) has shone a great light on the issue and on the food challenges in our region.”

But a 2012 report  from the Stanford Center on Poverty and Inequality and the Russell Sage Foundation does say that food-related philanthropy gets a significant boost as a result of a disaster. The report looked at how Americans responded to the Great Recession, a national economic disaster. It showed that Americans’ total funding to foodbanks rose by 2.2% from 2007-2008 and by 31.9% from 2008 to 2009, the early days of the Great Recession. The takeaway — in a crisis, food need quickly captures the heart and wallets of donors: individuals, corporations, foundations and government. 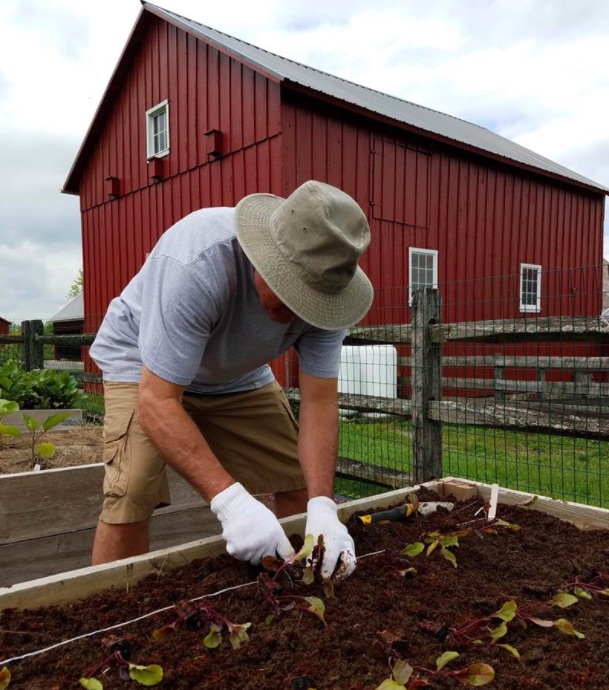 COVID-19, said Larry Welsch, is the most challenging time he has seen in his 11 years as the founding executive director of the Chester County Food Bank. “I have never had to deal with something like this.”

Welsch said the need for food practically doubled, rivaling their busiest time of the year — the holiday season from Thanksgiving to Christmas. “Right now, we are doing about 90 to 95,000 pounds of food a week and I still see that need,” he said. “I don’t anticipate that dropping off soon. We still need to be there.”

But he also added, “It is the easiest fundraising I’ve ever had to do.”

Welsch, who is retiring at year’s end said it isn’t easy fundraising in a rich county because donors are inundated with requests for money. “Usually in March we would raise about $60,000 to $80,000,” he said. “In mid-March this year we raised $450,000 and by mid-June we had raised $2.2 million. Foundations contacted us and pushed aside application requirements and over 2,000 new donors gave and the average gifts were not small.”

“If there is a bad part [of this attention] it is that it shows food insecurity has increased tremendously,” Keim said.

About 1 in 4 Americans at some time during fiscal year 2019 participated in at least one of the 15 food and nutrition assistance programs that the United States Department of Agriculture administers at a cost of $92 billion annually. In April, 43 million Americans were participating in SNAP (Supplemental Nutrition Assistance Program), the largest of the programs and better known as food stamps.  There has been a 10% increase in SNAP usage in the state between February and May 2020.

Feeding America’s Map the Meal Gap database shows that the Delaware Valley has a food insecurity rate ranging from a low of 6.3% in Chester County to 10.3% in Camden County. Philadelphia is a regional outlier with one of the highest rates in the country – 16.3%.  Of Pennsylvania’s estimated 1.4 million food insecure residents, 257,000 or about 18% live Philadelphia. The group also said the demand on food banks since March has increased an average of 50% and it is estimating members will need $1.4 billion to keep pace with the exploding need.

“Some donors will feel that they can go back to their previous giving or turn their attention to other causes, but Philadelphia was the hungriest major city in the country, pre-COVID, and there is no reason to expect that to improve in any significant way,” Hertz said. Volunteers at WMMR’s Camp Out for Hunger collect food for Philabundance in this 2015 photo from Generocity’s archives. (Courtesy photo by Chorus Photography)

Philadelphia is home to two large food banks. Philabundance, which served 90,000 people a week through a network of 350 agencies in the nine-county Pennsylvania and Southern New Jersey area before the pandemic, is one. “We have distributed 83% more food than the same period in 2019,” Hertz said. “Overall, we are spending four times the amount we had budgeted for food.”

The other is Share Food Program, which serves 1.5 million weekly meals in Philadelphia and the surrounding counties. “Certainly, contributions from individuals and foundations have increased dramatically, but so has Share’s need for investment into critical staff and infrastructure,” said George Matysik, Share’s executive director. “Since the beginning of Covid-19, we have doubled essential staff, ready to meet the continually rising need for critical response in the foreseeable future,” he added. “As the largest food bank and hunger relief organization in the region, Share is undertaking likely the largest hunger relief response our area has ever experienced.”

But food banks aren’t the long-term solution to hunger argues Keim. “Food insecurity is a symptom of other things. Addressing that symptom with one approach, with just using food banks, pantries, won’t do it,” she said. “We have to be opened to looking at SNAP and WIC.”

One of the Greater Philadelphia Coalition Against Hunger’s major initiatives is connecting eligible residents to these federal food benefits.  SNAP is a cash assistance program to help increase the food purchasing power of low-income people; WIC, the Special Supplemental Nutrition Program for Women, Infants, and Children, provides federal grants to states for supplemental foods, health care referrals, and nutrition education for low-income mothers and their young children.

The Coalition is has joined a national push for a 15% increase in SNAP benefits, which Keim said roughly translates to a one-person household receiving an added $29 a month, while households of two, three, and four persons would receive an added $54, $76, and $97 a month respectively.

Still, the fundraising concern is that COVID-19 will continue to wrecks havoc but donors will turn their attention to the next disaster.

At Philabundance, Hertz said they are already seeing the impact of diminished media coverage. “The need doesn’t go away but the attention to it diminishes,” she said. “The demand for food from our agencies has increased 60%, while the donations have declined by 60% from April 1 to June 20th.”