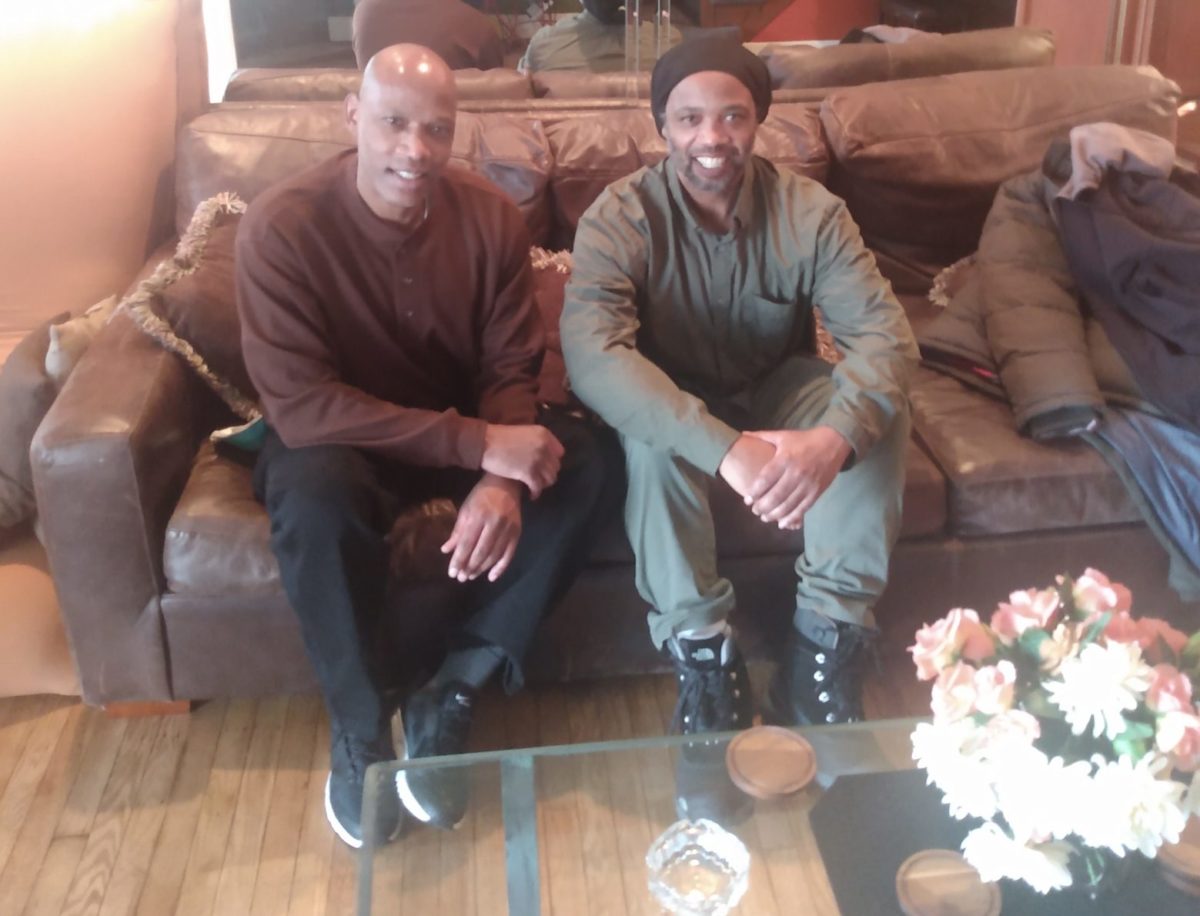 If anyone can relate to trauma it would certainly be Lee (right) and Dennis Horton. The brothers were falsely accused and convicted and were ripped from family and life as they knew it.

Lee and Dennis Horton’s father warned them years ago about their childhood friend Robert Leaf.

“He told us to stay away from him, he wasn’t doing anything with his life, “Lee recalled.

But on Memorial Day weekend back in 1993, the brothers ignored that warning. It was a decision they would deeply regret.

Like many others that weekend, they were celebrating the holiday cooking out with friends, when they decided to go for a beer run. That was when they picked up Leaf, who unbeknownst to them had just committed armed robbery and murdered a man.

What the brothers also did not know was that police were following Leaf. So when they were pulled over, police not only arrested Leaf but Lee and Dennis also.

So began one wrong turn after another, leading to the brothers being charged with second degree murder — a charge with an automatic life sentence. They have consistently maintained they are innocent, but it would be almost 28 years before they were released.

Given his past, the brothers admit it was “sheer stupidity” to pick Leaf up that night.

"We weren’t unfamiliar with bad neighborhoods or street life, but we led kind of square lives."

And although they were kept together over their many years of imprisonment, prior to the night of their arrest, they led separate lives. Lee, 27 at the time, was a husband, and father of four, including a two-week old newborn. He had been on the same job for over eight years. Dennis, then 23, was engaged to be married and had recently suffered a work injury at the time of their arrest.

“We weren’t unfamiliar with bad neighborhoods or street life, but we led kind of square lives,” Lee said.

“But nobody looked at any of that,” Dennis added, saying that this was a time when it seemed like the City “just wanted to sweep the streets of us [Black men],” he continued.

Shortly after their conviction, the brothers filed a motion for a change in counsel. They described the experience as nothing less than belittling. “We didn’t know all the legal jargon, we weren’t very articulate, and we were emotional,” Lee explained. The judge was dismissive, ordered the two to be seated and barely let them speak.

From that day, they vowed to educate themselves, and that they would be able to confidently defend their case before anyone who had power over their future.

That led the brothers into a journey of self-education not only in the law, but in raising their overall literacy level. “Both of us have probably read over 1,000 books,” Lee told Generocity.

Over the next decades, Lee and Dennis would file more than a dozen motions and appeals, despite what one inmate told them: “few men free themselves.”

And it often seemed like time was rarely on their side. Each process would take months or years to either be heard or have a decision rendered. In one denial, the brothers were given 20 days to respond. When they had received that notice, 10 days had already passed.

Before their trial, Lee and Dennis were offered a plea deal which would have reduced their sentence to five years.

“In our naivete, we thought it would be shown we were innocent. Why should we take the deal?” Dennis said.

Yet, they admit that if they had known how “vicious the system was” and that they would later serve almost 30 years, they may have just accepted the deal.

“But it wasn’t meant for us to be out at that time,” he added. Both believe their time in prison was not for naught and that they were a benefit especially to other inmates. “Part of our fight against the system was to help other innocent men get free,” Lee said,

While at State Correctional Institution Chester, where they concluded their sentence, the brothers became Certified Peer Specialists (CPS)  through the state of Pennsylvania. A CPS self-identifies as a person with a serious behavioral health disorder (mental illness, or co-occurring disorder), with a lived experience similar to the people they are trying to help. The brothers also became Wellness Recovery and Action Plan or W.R.A.P. facilitators.

W.R.A.P. is an evidence-based prevention and wellness program created by people themselves in recovery. Lee and Dennis attest firsthand to the program’s effectiveness. They are not just trained in it, but both say W.R.A.P. delivered them from severe anxiety, depression and for Dennis — frequent panic attacks.

Their transformation and the success they were having with others who were incarcerated got the attention of prison staff.

The brothers recall one out of control crisis at SCI Chester where inmates were literally tossing urine at officers. The brothers were called in to intervene and say they were able to solve the crisis, and over a period of visits ,saw the population in solitary confinement or “the hole” go from overflowing at about 100 inmates to less than 10.

“People who are incarcerated are not going to turn to staff with their problems,” Lee said.

And if anyone can relate to trauma it would certainly be Lee and Dennis. In addition to being falsely accused, suddenly losing their freedom, and being ripped from family and life as they knew it, Lee and Dennis also dealt with grief. Loretta Horton, their mother and “biggest champion,” passed away less than a year before their release. They were unable to attend her funeral.

"Hands down the W.R.A.P. and peer specialist programs were the best programs the Department of Corrections offered."

In going through the peer specialist training, the brothers say their own grief and trauma helped them to help others.

“Hands down the W.R.A.P. and peer specialist programs were the best programs the Department of Corrections (DOC) offered,” Dennis said.

The DOC’s peer support program began roughly seven years ago, as a response to concerns from a disability rights organization, said Dr. Lucas Malishchak, director of the DOC’s psychology office. There were concerns that the DOC was not delivering adequate mental healthcare for those incarcerated and that there were instances of use of unnecessary force. Dr. Malishchak said there are now peers in every facility, and that they are a valued augment to the DOC’s mental healthcare program.

“Our clinical staff is very credentialed, but they don’t have this lived experience of having been incarcerated or having received mental health treatment,” Dr. Malishchak said. He added that from day one the certified peers have helped contribute to safe de-escalations, and has noticed more empathy and compassion from correctional staff.

Mental Health Partnerships (MHP) trained selected DOC staff to provide the 75-hour peer specialist and W.R.A.P. trainings. James Klasen is an advanced W.R.A.P. facilitator and CPS trainer at MHP. He agrees that someone with similar experiences helps break down stigma, a first step in getting help.

“What we’ve seen for both inside and outside is that a CPS can give dedicated time, and practical and not just diagnostic help,” Klasen said. According to Klasen, MHP has hired formerly incarcerated staff as facilitators in addition to providing peer support for those reentering community.

Lee and Dennis are advocates of peer supports in the community, “with police only as a backup.”

“Police are trained to pull a gun. We need people trained to deal with people in crisis,” Dennis said. “And we know it works because we’ve done it on the inside.”

While incarcerated, the brothers were noticed for more than their peer support work.

One day their counselor asked them why they were in prison, adding that there was something different about them, and didn’t belong there. Knowing they had exhausted all other legal options, the counselor advised them to apply for commutation.

The PA Board of Pardons is not designed to decide an applicant’s innocence. However, Steve McFarland, director or Pardons and Communications for Lt. Governor John Fetterman, said that for cases like the Hortons’, with life sentences and with no options left, commutation of a sentence is their last chance. It is also an uphill battle.

McFarland noted that Pennsylvania is the only state in the nation that requires a unanimous vote among its five board of pardons members. Incidentally, PA has the second largest number of people serving life without parole.

Another problem with the commutation process is that the questions assume some degree of admission of guilt, noted Dr. Kathleen Brown, then an associate professor at the University of Pennsylvania’s School of Nursing. Brown had been working with the Innocence Project when she was introduced to Lee and Dennis.

“I found them completely credible, and I noticed Chester staff had a great deal of respect for them,” she said.

But Brown noted the challenge of answering the parole board’s questions without admission of guilt. “How can you be remorseful for something you didn’t do?” Brown asked. The brothers’ one regret was picking Leaf up that night and setting into motion their nearly 28-year ordeal.

"The world is better now that they are in community."

In 2019, their first request (which had been filed two years prior) was denied but was held for advisement. Finally in December 2020, the board reached its unanimous vote in favor of the brothers, bringing Fetterman — who became a staunch supporter for the brothers’ release — to tears.

“The world is better now that they are in community,” said McFarland; adding that “their story will stay with me for a long time”

Lee and Dennis are using their training and are employed as certified peer specialists. They are grateful to be back in the community and continuing the work they started while “on the inside.”

But they noted that hundreds of men and women with very similar stories remain incarcerated. “Given the chance, they would want to be out and do the same thing we’re doing,” Dennis said.

The City’s Department of Behavioral Health and Intellectual disAbilities Services offers peer support training and has designed a peer support toolkit to help agencies incorporate peers into their programs.