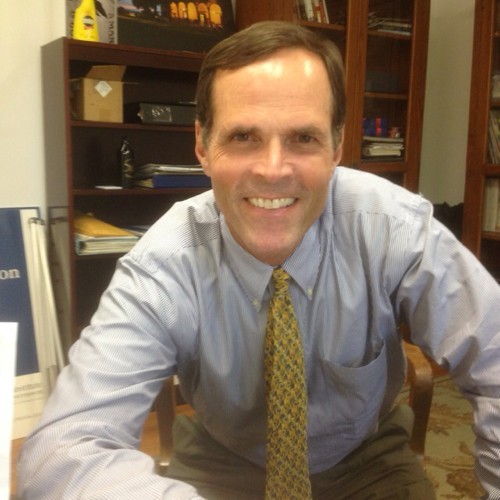 It’s not all about good government for David Thornburgh.

He spent almost two decades playing alt-country and Americana music with his wife in a band called Reckless Amateurs, and wielding a pedal steel guitar in another called The Miners. He’s an avid scuba diver — having found this passion at the age of 14 — whose most recent excursion was a diving trip to New England at the end of July. And he describes his Victorian home in Chestnut Hill as “wonderful” and “maintenance-intensive” — meaning that any spare time he and his wife find goes in to working on the house.

But for nearly seven years, as president and CEO of the Committee of Seventy, it has been all about better government for Thornburgh.

Better government, he is quick to note, is a more attainable goal than a good government.

“Good brings some sort of moral overtone with it,” Thornburgh told Generocity. “I just think, an organization like ours should always be trying to set high expectations, but to move us as a City and a political culture step-by-step toward that. So, every day ought to be better than the day before.”

In July, Thornburgh announced that he’ll be stepping down from the top post at the nonpartisan civic leadership organization, effective January 2022. His tenure, which began in 2014 following the retirement of longtime CEO and newspaperman Zack Stalberg, will come to a close then. But it will also mark a new beginning at the organization — as a senior advisor.

Thornburgh plans to focus his efforts on fair redistricting and open primaries for Independent voters.

In addition to stops at the Economy League of Greater Philadelphia and University of Pennsylvania’s Fels Institute of Government, Thornburgh built a career on new ventures and entrepreneurship. He founded or co-founded several area institutions, including Graduate! Philadelphia, Campus Philly, minority business accelerator The Enterprise Center, and the Philadelphia 100, which celebrates the fastest-growing privately-held companies in the region every year. But politics and government were the family business, and Thornburgh grew up among people involved in community and public service. His father, the late Dick Thornburgh, helped to shape politics for a generation as both governor of Pennsylvania from 1979 to 1987, and then as attorney general of the United States under Presidents Ronald Reagan and George H. W. Bush. According to Thornburgh, his mother and father were community-minded people who dedicated themselves to challenges of their day.

“A great expression, this applies in lots of different areas, is that you hear with your eyes,” Thornburgh told Generocity. “You watch what people are doing. In that case, I’m watching my mom and dad and the contributions they were making, and those were the examples that were set for me and the lessons that I heard.”

The lessons Thornburgh learned growing up, combined with a lifetime of experience working on civic issues and politics in Philadelphia and the Commonwealth at large, led him to the Committee of 70 in 2014.

But his work and that of the organization took on a new sense of urgency just a few years later when voting and democracy itself came under pressure.Overnight, the Committee of 70’s mission of the past 100 years was front and center in the political debate.

For years, the organization functioned as a sort of watchdog group, looking out for politicians taking bribes or funneling taxpayer dollars. But with a hyperpartisan divide among the electorate in the current political climate, Thornburgh realized the Committee of 70 needed to take a more proactive stance. Under his leadership, the group did extensive work to educate voters, tripling the number of people who used the organization’s nonpartisan online voter education resources. The effort disseminated clear and concise information on voter registration, polling locations, candidate platforms, and ballot questions, among other things.

Thornburgh’s Committee of 70 also supported the Commonwealth’s Act 77 election reform package in 2019. The new law made voting easier for Pennsylvanians through no-excuse mail-in voting, extended registration periods, and more — all of which became not only beneficial but necessary when holding an election during a pandemic last year.

And when the new law came under pressure from misinformation and disinformation, the Committee of 70 was there to make sure voters had accurate information about how to fill out a ballot, what’s a naked ballot, how to use the envelopes, and more.

The outgoing CEO also worked hard on equity and diversity issues within the nonprofit, bringing its 64-member board to near gender parity, and increasing representation of members of color to 20%.

Still, the two accomplishments of which Thornburgh is most proud — both of which he’ll continue to work on with the organization — are his efforts with redistricting and bringing independent voters into open primaries.

“Pennsylvania was exhibit A among states that had egregiously partisan maps that were drawn 10 years ago,” Thornburgh said. “And there are about a million [independent] voters, duly registered voters in Pennsylvania, who basically … sit on the sidelines on primary election [day]. Which is unfortunate, because almost always in this hyperpartisan world that we live in, the critical election choices are made during the primary election.”

Two years ago, Gov. Tom Wolf appointed Thornburgh chair to an advisory commission on redistricting in the Commonwealth. The report he produced turned heads in Harrisburg. To engage more people to start talking about gerrymandering,

Thornburgh launched what he called the Draw the Lines citizen engagement effort, which, to date, has seen over 7,000 Pennsylvanians take an active role in drawing their own district maps. Twice-yearly competitions challenge residents to draw legislative maps, giving them hands-on experience and a feel for what the stakes are when redistricting rolls around every 10 years.

"Maybe two weeks from now the Census data will drop and Pennsylvania, like all other states, will go about drawing new maps."

“That was one of our great signature efforts of all time and is now playing out because about three weeks, maybe two weeks from now, the Census data will drop and Pennsylvania, like all other states, will go about drawing new maps,” Thornburgh said.

“And we now have an active and energized core of citizens, who know what the deal is and are not going to have the wool pulled over their eyes.”

When it comes to open primaries, Thornburgh said, Pennsylvania is one of the few states that doesn’t allow registered independents an opportunity to vote. According to him, in 2020, out of 203 State House races in the Commonwealth, voters determined the winners in the primary in 95% of the contests.

That means over one million people who took the time to register to vote had no say in their representation.

Moreover, Thornburgh believes that inviting independents into the primary process could help cut through the partisan gridlock overtaking contemporary politics. “We’re leaving people out of the election who are less partisan and who might cluster maybe closer to the middle of the political spectrum,” Thornburgh said. “We’re ceding elections to candidates from the extremes.”

“And then when they get to Harrisburg or go to Washington, there’s no reason to expect that somehow they’ll miraculously move toward the middle,” he addedd.

Nothing was more extreme than the 2020 election, which gave birth to the Big Lie, a thousand conspiracy theories that trickled down from the uppermost echelons of our government, culminating in the Jan. 6 attack — or coup attempt — on the Capitol in Washington D.C.

In many ways, the Big Lie continues to spread and grow as legislators across the country pass restrictive voter laws or dabble with so-called audits of the last election, sowing doubt in the electorate. In Pennsylvania, the latter is led by Sen. Doug Mastriano, a Republican from Adams County, who is referred to in some reports as “one of the legislature’s biggest purveyors of false claims of widespread fraud in the 2020 election.”

And while the Big Lie is lunacy to Thornburgh, he’s a glass-half-full kind of guy.

Not only are the conspiracy theories losing potency, he said, but these days it’s much easier to find people who feel the election was a success than vice versa. Thornburgh trusts the everyday men and women that volunteer their time to run elections.

He also trusts the letter of the law. In Thornburgh’s view, the fact that the courts struck down almost every challenge to the 2020 election is proof that the system works.

“The batting average of those cases when they’ve come to court is worse than the Mendoza Line,” he said, referring to the now-infamous Pittsburgh Pirates infielder Mario Mendoza who struggled throughout his major league career to keep his average above .200.

Although hyper-partisanship consumes the political landscape, it’s in a tug-of-war with apathy in most off-year elections.

"I have a serious concern that local elections are more and more nationalized."

Local races, judgeships, and obscure ballot questions that more directly affect a person’s life often slip by with slim margins in midterm or odd-year elections, with little to no engagement from the electorate. Everyone votes for president, but almost no one casts a ballot for the people who decide on zoning or tax laws in the city. The effect is, while all politics may be local, local politics are looking to the national stage for attention — and financing — distancing some officials even further from their constituents.

“I have a serious concern that local elections are more and more nationalized,” Thornburgh said. “The [Philadelphia] district attorney’s race is a good example, particularly, when he was elected four years ago, [Larry] Krasner benefited from a significant amount of outside visibility and outside financial support and rode a wave of national political interest. And I’m not sure that’s healthy.”

Thornburgh feels that both the city and the Commonwealth need to find a way to reengage voters regarding local elections.

The past seven years as CEO of Committee of 70 were wonderful, Thornburgh said, but now, he wants to focus on a few high-impact, high-value projects and ventures. With the board’s blessing, his immediate focus will be the redistricting process, followed by the push to open the Commonwealth’s primaries to independent voters.

“We can bring the vote to a million people in the Commonwealth,” he said.

After that, he’ll be on the lookout for any other new ventures he can bring to life. And in his own words, he’s very “jazzed” about that.

Thornburgh hopes that the redistricting process will play out more positively than it did in Harrisburg 10 years ago. He fears an extremist from either party could win Pennsylvania’s statewide races for governor or U.S. senator next year, dooming the people to a politician who propagates disinformation or focuses more on fundraising or their Twitter following than on the job of governing. Pennsylvania is a center-left or center-right state — that’s one thing of which he’s sure.

And it’s that time in the political cycle where the city starts thinking about new leadership. David Thornburgh believes it would be “kind of cool” for Philadelphia to choose its first woman for mayor.

“Not that I’m picking any favorites,” he said