The first of several fall Community Data Jams was held last week at Taller Puertorriqueño in the Fairhill section of the city. This event was hosted as part of the cultural organizing project called “Restore-Reimagine-Rebuild Rivera & Mann Centers,” which is being led by Just Act and HACE CDC.

This community project is happening alongside the city’s Rebuild initiative at Rivera Recreation & Mann Older Adult centers, which consists of $15 million in physical renovations to the interior and exterior of the centers located at 3201 North Fifth Street. Renovations are projected to be completed in the fall of 2022.

At the recent Community Data Jam, Fairhill residents came together to participate in a board game activity in which they collectively discussed recreational programming priorities for the Rivera & Mann Centers once completed.

“They are recognizing and naming which activities existed before that should come back but with greater resources, as well as what are some possible activities that could happen in the next two to five years were certain things to be put in place,” said Dr. Lisa Jo Epstein, the executive and artistic director of Just Act.

Just Act is an organization that uses theater as a catalyst for activism. Just Act and HACE CDC came together to work on the proposal for the community project in 2019. The first phase of the project was funded through the city’s Rebuild initiative. The current phase of the project is being supported by the Philadelphia Association of Community Development Corporations (PACDC).

Though the COVID-19 pandemic has impacted the project, the Community Action Team — comprised of Fairhill residents and Parks & Recreation staff — still met for 35 weeks straight on Zoom to discuss topics, like social power and neighborhood history.

“They’re able to speak really from a place of lived experience and expertise about the current condition and what’s missing and what has happened in the past that could be lifted up,” Stasia Monteiro said of the CAT. Monteiro is HACE CDC’s Neighborhood Advisory Committee program director. “I think you need to know what you’re working with if you’re going to offer a community something,”  says Teea Tynes, a member of the Community Action Team. (Photo by Jenny Roberts)

Teea Tynes, a member of the CAT, said the team has been essential in determining who in the neighborhood would most benefit from the Rivera & Mann Centers and how to encourage participation from members of these demographics.

“I think you need to know what you’re working with if you’re going to offer a community something,” Tynes, 51, said. “It has to be something that they need, that they can benefit from, so that is what the CAT has been good at trying to figure out.”

“As part of an underserved community, we really do need people to really listen to us and listen to what we need, rather than tell us what we need,” Tynes added, “make us a part of the process, not just the end user.”

The CAT also helped plan the 12 storytelling sessions that were held this past summer. Another set of residents auditioned to be on the Story Engagement Team (SET), which facilitated the events.

In preparation for the summer storytelling events, Epstein trained SET members on how to facilitate events, listen with generosity, hold space for people and harvest data from story circles. Members were also trained in an active listening technique called a “gift back,” which Epstein said is “designed to capture the heart and soul of a person’s story in an instant moment of theater.”

After each story circle, groups would pick one story for the whole room to hear, and that is the story that was “gifted back” through means such as dance and acting. Roxanne Bell, a member of the Story Engagement Team. (Photo by Jenny Roberts)

“Some of them were so overwhelmed and thrilled that we were able to capture exactly what they were feeling,” said SET member Roxanne Bell, 68.

Bell, a former kindergarten teacher, was especially touched by the story shared by a 12-year-old girl about her struggles with reading and literacy skills.

“We encouraged her to know she can read a book, she can write her name,” Bell said. “What I’m really looking forward to is more after school programs to help children who have…learning disabilities because we need to reach out to them.”

More than 125 people shared stories and identified their own values at the story circle events. Residents narrowed down the responses from the events to 10 key values that will guide future programming, including generosity, resilience, growth and respect. These values were incorporated into the game at last week’s Community Data Jam.

“It’s really important that what the neighborhood values is directly linked to the activities that they’re choosing,” Epstein said. “It’s not just picking up a plan from any recreation center. It’s saying, ‘We are asking the city to be culturally and community responsive to what we value, and these are the activities that demonstrate those values.’” 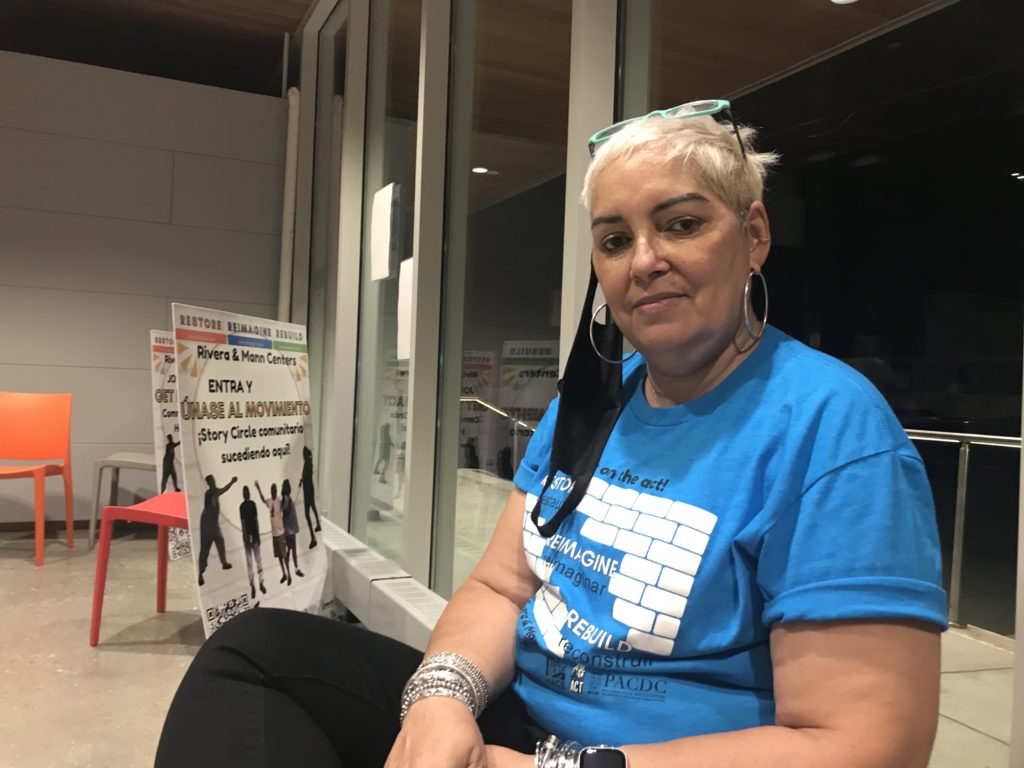 “I would like to do some intergenerational teaching, where you incorporate some younger people and older people.” said Marilyn Rodriguez, an art teacher and member of the Community Action Team. (Photo by Jenny Roberts)

Marilyn Rodriguez, 59, is an art teacher at the Mann Center and a CAT member. She said she is hoping to see programming that highlights Latinx culture and reaches out to youth.

“We want to see more recreation for the kids because that’s really lacking,” Rodriguez said. “I want to see more parent involvement, more volunteers. I would like to do some intergenerational teaching, where you incorporate some younger people and older people.”

Monteiro said some of the other consistent programming ideas mentioned by residents include: gardening, cooking, community performances and workforce development opportunities.

The third phase of the “Restore-Reimagine-Rebuild Rivera & Mann Centers” project will bring community residents together to edit, review, rewrite and confirm information for a final blueprint that SET and CAT members will use to advocate to the city for support of their plan.

The next Community Data Jam will be held in October at Casa Indiana.