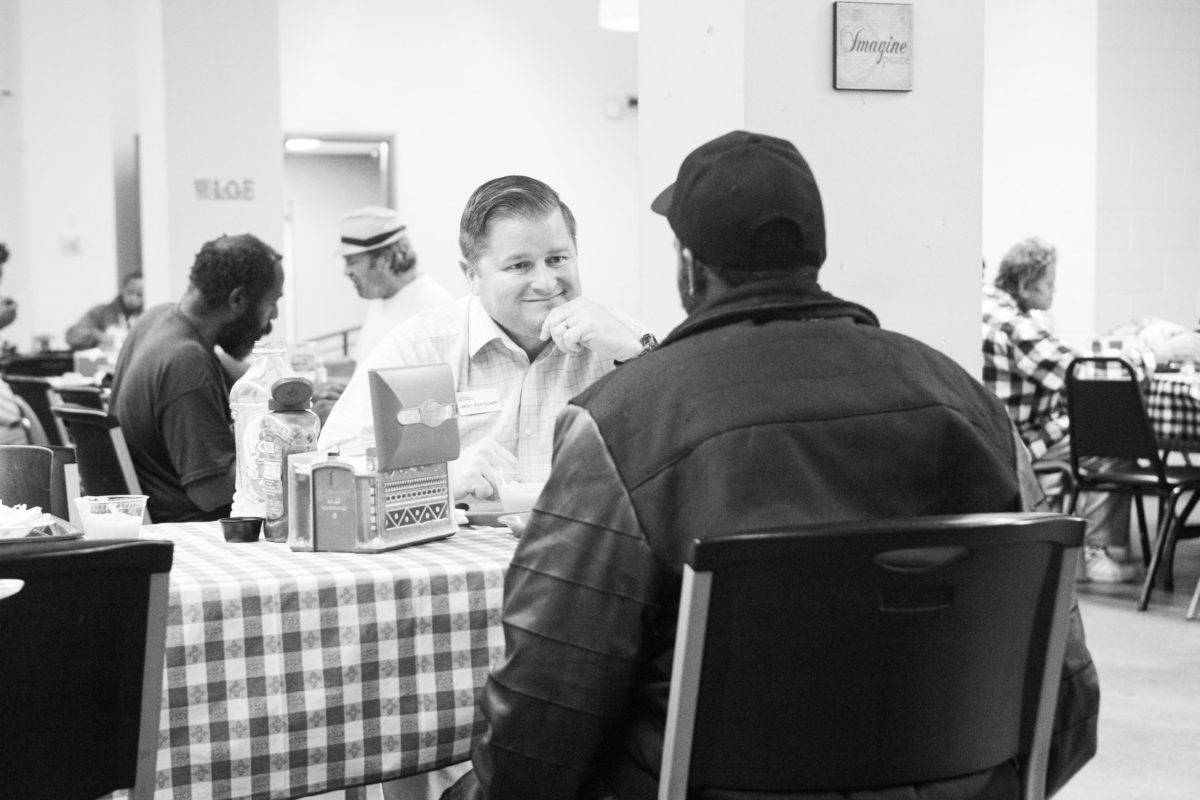 The caller was from the Philadelphia 76ers, calling on behalf of player, Joel Embiid.  Montgomery was told the Mission was one of three local nonprofits selected to receive a portion of Embiid’s $100K winnings from this year’s NBA All Star Game

“It was one of those weird calls where you think somebody’s playing a joke,” Montgomery said.

But this was no joke. Not only was the Mission going to receive a third of the $100K donation, but the 76ers organization would be matching  Embiid’s gift with an additional $100K to the three nonprofits, giving the Mission a total of $75,000 – seemingly out of nowhere.

“To this day, we still don’t know how [Embiid] heard of us,” Montgomery said.

Yet, the Mission has literally been doing God’s work for over 140 years. The faith-based agency says it is Philadelphia’s only provider of free three meals a day every day of the year to anyone in need, and the city’s largest single site shelter for men.

Founded in 1878 by Philadelphia legend John Wanamaker and several other prominent local businessmen including John B. Stetson and W. Atlee Burpee, the Mission began serving hot coffee and a roll-on Sunday mornings before church service. On its opening day, more than 200 men showed up. During the Great Depression, the Mission expanded its services to providing shelter to men in crisis. Today, there are 250 beds at its current Center City location.

A few months after Embiid’s gift and the 76ers match, the Mission was awarded another $7,500 from the National Basketball Players Association Foundation, the philanthropic arm of the basketball players union.

And while appreciative of the high-profile gifts, Montgomery also notes that they’ve kept the doors open over these many years, thanks to “roughly 12,000 faithful private donors.”

But he does believe that Embiid and the NBA gifts is a validation of sorts.

“We believe Scripture tells us to put our lamp upon a hill and when you do good deeds, people will notice,” Montgomery said.

The bulk of the three daily meals Sunday Breakfast  provides are donated through partnerships with organizations like Philabundance and other local community groups. Montgomery said the cash gifts will help the Mission to purchase foods and in turn offer a wider menu to its guests and residents. Which, Montgomery said, supports its mission to help “rebuild dignity and respect. Those who are truly hungry, often don’t have many food choices.” Serving in Philadelphia, deemed  “the poorest of the largest U.S. cities,”  means the Mission lifts a heavy load.

“We are serving the chronically homeless,” Montgomery said, “those who [for various reasons] are not in the city’s system.”  According to Montgomery, the Mission provides about 600 meals daily and continued doing so even through the pandemic, when it shifted to a grab and go style. It reopened its dining hall in July.

“Sheltered guests,” as the Mission calls them are men who come through as 30-day emergency cases. But through its Next Level program, men can stay as long as a year while they go through a transitional program either at Sunday Breakfast or with another agency.

During their initial 30-days, men receive progressive case management services.  Staff look for engagement as they help men identify their obstacles to housing stability. “And they have to be willing to work on something,” Montgomery said.

Often, that one thing to work on is securing some sort of official identification.

“Our own internal study survey found 65% of the men we serve do not have any form of government identification. Without ID, you can’t get housing, a job and you can’t apply  for benefits” Montgomery said. After the 30 days men are either referred to other city shelters, or like Tony Mclean, 58, enter the Mission’s Next Level program. McLean came to Philadelphia in April of this year, from Baltimore. He had been on the streets for five days before he found Sunday Breakfast.

“I needed a change of venue if I was going to gain my life back,” McLean said, who added that he has survived “many years of drug addiction.”

McLean said it was shortly after coming to the Mission, he knew this was where he would get the help he needed. (And it didn’t hurt that the food was good.) “Compared to a lot of the places I’d been, this was like a five-star meal,” McLean said.

Staff noticed something in McLean and asked him to consider volunteering in the security team. “It’s an invitation to them to be direct participants in making their environment safe,” Montgomery said.  And McLean took the invitation very seriously.

“Being from the streets, I know that you never know who’s coming in here,” Mclean said, “and if you let the wrong people in, everyone’s safety is in jeopardy,” he added “And I look at it as a way to give back to a place that gave back to me. They gave me a new lease on life. I could still be on the streets today — or dead.”

For the next few months, McLean served as a dishwasher, and was then offered a paid part time position as a Shelter Ambassador, providing frontline security. Since coming to the Mission in April, McLean now has his birth certificate, social security card and is on the waiting list for permanent housing.

Securing employment is often the next hurdle for many Mission residents. But Montgomery said housing stability is a critical first step. “We believe this is the most important service we offer,” he said; adding that by providing that stability for one year increases their chances of being hired. It is in providing these practical services that the Mission aims to help rebuild men who according to Montgomery often come in broken.

In keeping with the goal of restoring dignity, Sunday Breakfast is intentional in how they serve meals.  Guest are given plates and silverware rather than disposable cookware. “And we serve them in our hall, at a table, [they are not] waiting in a line outside,” Montgomery said.

As a faith-based organization, Sunday Breakfast staff believe in “redemptive power of God’s love,” Montgomery said. He noted that many residents say they finally feel loved and that the Mission is the family they never had.

Chuck, who came to Sunday Breakfast after serving 48 years in prison once told Montgomery, “you humanize us.”

Through a partnership with Thomas Jefferson University Hospital, each week, guests have access to full clinical services including hospital admission if necessary. Sunday Breakfast also provides daily services for women and accompanied children such as meals, showers, and referral services.

Montgomery attributes success stories like McLean’s and countless others to their philosophy of “eliminating poverty through an empowerment model.” We don’t just want to do for people but want to respond to their expressed needs. It’s much more effective,” he said.